Well almost. It was actually paradise by the Silo light and Meatloaf would have loved it. Too obscure – then go listen to Bat out of Hell.

WHAT IS HE ON ABOUT!! To explain

Last night we went to an event at Silo Park. Actually it was the first Pop Up City event I’ve been to.

The best of the Wellington food and drink scene was captivatingly on display in the a-mazing Silo 6. Organised by the best PR team in the world – Jade & Rebecca from Raw PR – this was a not to be missed event and it delivered big time. For those of us who are foodies it was “paradise”.

From Logan Brown to the Six Barrel Soda Co the best of Wellington was on display to sample, and sample….and sample.

And a nicer bunch of Wellingtonians you would not find.

So I started with the pork roll from Ti Kouka Café which was excellent. Then to the silo that housed Scopa and Duke Carvell’s No. 6 and of course it would have been rude not to sample the Fusilli pasta with pork & fennel sausage and the bait fish bagel respectively. Both fantastic.

Those mazes are a bit confusing so I found myself back at Ti Kouka Café where it would have been poor form not to sample their pork roll (again).

So changing tack I headed into yet another silo to find the lovely Lucy from Grill Meets Beer serving hop & hoisin braised reserve short rib, brioche bun & yum yum slaw. I can tell you it took me longer to say that than it did to hoover down the bun!!

There was a queue forming to my left and upon investigation I discovered it was the paua fritter queue! So I joined it – as you would. Yes it was the queue to Logan Brown’s exquisite wild paua fritters, wasabi mayo & avocado sammies. When Shaun asked who should get the next batch I suggested he should serve the elderly first – well I thought it was funny!!

In need of something to wash all that food down Rebecca steered me into the drinks silo which not surprisingly was very popular but being a foodie and not a drinkie I sought out the non-alcohol Six Barrel Soda Co where I guzzled a charming raspberry lemon soda. And from my observation a few more should have tried the non-alcohol option haha. Oh and bumped into Deb & Jade on the way. And sorry for the photo quality – a combination of poor technique and weird lighting haha. 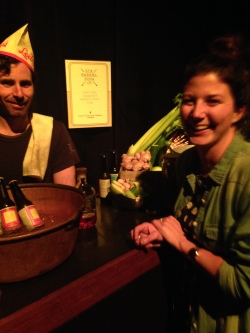 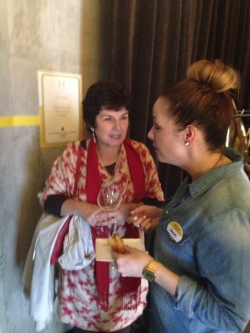 By this stage it was time for “afters” so the next silo stop was for coffee, chocolate & cookie. Although to get there I had to go via the Logan Brown silo where another paua sammie was quietly scoffed! 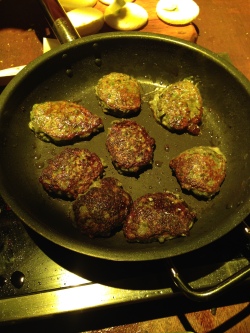 The Wellington Chocolate Company were serving a fabulous chocolate foam with a slice of choccy on top so that got the tick. And the packet of salted caramel cookies were secreted in my pocket to be enjoyed with a cup of tea when I got home. 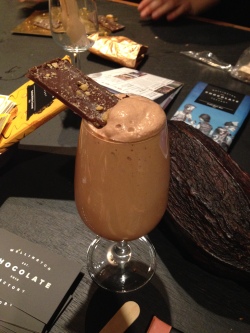 What a fantastic night. Those Wellingtonians sure know how to put on a veritable feast. But you’ll have to go to Wellington to experience it. So jump on the interweb and “grab a seat” to have a wonderful culinary experience.