We’ve been meaning to go to this new Ponsonby Rd eatery for some time now having been given a voucher for my bday!

So we went last Friday night and what a treat. Tom & Josh have done a wonderful job with the set up. I love the high tables & stools – it gives it a communal eating feel which is quite European but Kiwis don’t seem as keen on it, as you are, in effect, sharing what is a cosy space. More on that later. 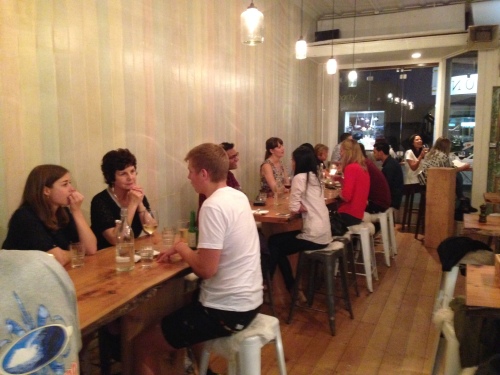 It’s a small menu with 4 “smallers” and 4 “largers” and 2 desserts but this was not a problem. It was a menu which with my choices proved to be quite gamey and delightfully so.

For smallers Deb had the ora smoked salmon, celeriac, granny smith and horseradish which she pronounced as somewhere between delicious and sublime. I had the alpine merino tortilla, feijoa, millet & sheep’s milk yoghurt which I pronounced delectable. You don’t come across hogget on a menu very often but it was beautifully cooked and of a mild gamey flavour which made the dish quite unique. Sorry about the photo below – I’d eaten the first tortilla before I remembered to take the photo!! 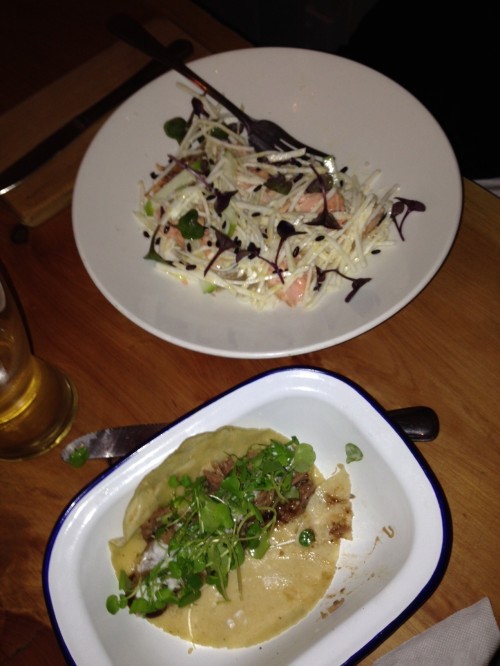 For mains, sorry largers, Deb had the beef rump with aubergine, black garlic & backa which was very tasty. I had one of the tastiest meals I have ever had with the wild boar boilup, kumara, doughboys, watercress and flax seeds. It was sensational. Served in a large bowl in the cooking juices, they give you a spoon to get the last drop. Again, on the nice side of gamey, or was that pleasantly smokey. 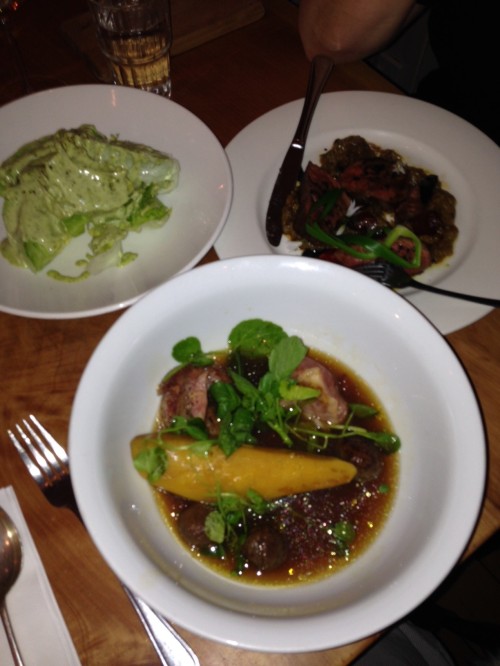 There were two sides to choose from so we had one of each: Tina’s wedge salad and kumara chips with smoked sour cream. The wedge salad is in the photo above – Tina had obviously smashed open the iceberg lettuce and poured a delicious dressing over it.

Two desserts so we had one of each. A divine dark Valrhona chocolate, tamarillo, black cardamon and …oops took a photo of the dessert menu and missed out the bit after “and” haha, and a TDF Banofee with young coconut and banana. 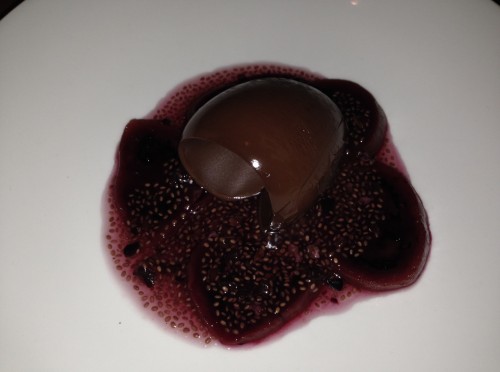 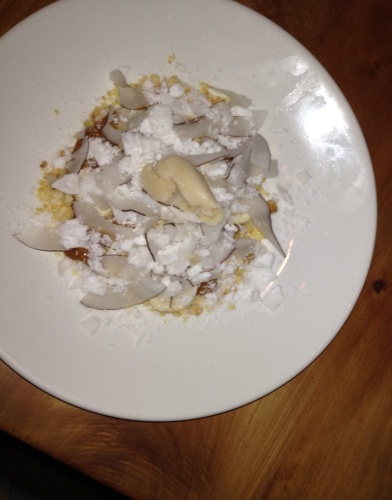 For me the meal was 11 out of 10. Such wonderful tastes and eclectic combinations. Friendly and attentive service (thanks Ana) and it was nice to see Josh on the floor serving and chatting – you don’t see enough of that in Ponsonby restaurants – but that’s another subject for a blog posting!! And I did a quick trip to the kitchen to thank Tom and team for the wonderful meal – not enough of that done either!

Oh and back to those communal tables. We had 3 couples on ours and we ended up having a most interesting chat to the ones nearest us. You can if you want to or not if you don’t. Sometimes it’s nice to share a conversation as well as a table.

And finally Tom tells me they’ll be changing the menu soon. I said leave the boilup on the menu or there’ll be trouble!!

Can’t wait to go back.

This entry was posted in Drink, Food, Uncategorized and tagged food, Ponsonby eating out, ponsonby restaurants. Bookmark the permalink.