Mexico: don’t you just love it

This is the third post I’ve done about Mexico (the restaurant) – they must be doing something right. And of course they absolutely are.

Ponsonby Mexico this time. Friday night. Stroll up Norfolk Street. Turn right and we were there. And as a bonus there was a street side table available for the grabbing. Fortunate as it was full and jumping inside!

Actually it was the first time we’d been back since the opening night so were keen to consider the full menu option. As you would. Water arrived promptly, menus already on the table (I like that), waitress arrived, order taken. 5 minutes. Great. Drinks: Margarita (of course) pour madame and Virgin margarita pour moi – to mix my languages – just felt like bursting into French haha.

The fried chicken arrived in no time, closely followed by the rest. Even before the drinks!

Anyway, to return to the virgin margarita. I often like to sample the non-alcoholic fare and I liked the sound of it – rose water, apple juice, lime juice, sugar, cinnamon rim. It was divine.

That fried chicken though – that is the standout offering for me – being a bit of an old fan of the Colonel. Actually a bit of a new fan as well. Only tend to have it when Deb’s out – then I can tell her I had chicken and salad without having to fib!! But I digress.

The tacos and the quesadilla were scrummy. Oh yes we had a vegetable special as well – little roast potatoes with a spicy tomato sauce – sooo nice. 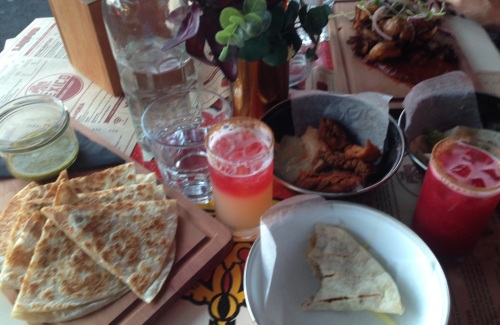 Meantime all was abustle around us with the passing Friday night revellers. Such fun.

For completeness (of course!) we had to try the desserts – Deb had the chocolate tart, the Mexican donuts special for me. The donuts were splendid – five mini donut balls with gooey chocolate in the middle. 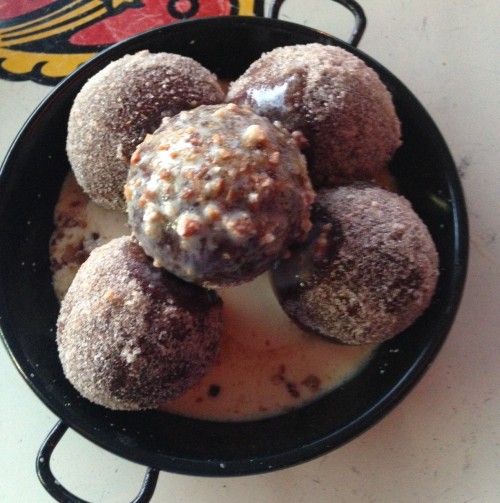 So another enjoyable night at Mexico. Food was excellent, service was friendly and attentive and maître d’ Josh was a star.

Thanks again to the wonderful Mimi and her team. Oh and Mimi, get those donuts permanently on the menu please.

This entry was posted in Drink, Food, Uncategorized. Bookmark the permalink.

3 responses to “Mexico: don’t you just love it”